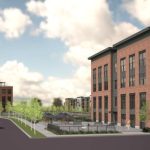 The Valleydale meatpacking plant in Salem that closed in 2006 is finally being repurposed by local developers Ed Walker and Joe Thompson. The $50 million venture will include more than 300 upscale apartments and amenities, along with some commercial outparcels. Walker – who blazed the way in downtown Roanoke for turning older buildings into living spaces – has owned the property since 2017 and has spent years figuring out the most feasible use for 123-thousand square foot former Valleydale plant. Tommy Miller is the Director of Economic Development for the City of Salem:

(Salem News Release) The City of Salem is pleased to announce a major economic development project with Valleydale Catalyst, LLC and  its principles Ed Walker and Joe Thompson. The proposed $50 million venture at the former Valleydale Meat Packing and Processing plant will eventually bring more than 300 upscale apartment units and a variety of resort style amenities to the property.

“We are extremely excited to formally approve this investment in our great city,” says Salem Mayor Renee Turk. “Each and every council member truly believes that this will be transformational for all of Salem.”
The Valleydale property is a located on the corner of Indiana and 8th streets less than a half mile from the Salem Civic Center, Kiwanis Field, and the Rotary Dog Park. Walker purchased it in 2017 and he has spent the better part of five years trying to find a suitable use or tenant for the building.

“We’ve worked through dozens of possibilities over the past five years originally hoping to use state and federal
historic tax credits,” says Walker. “Some were commercial and industrial prospects, but modern manufacturers
and processors have very different needs and requirements these days. I knew it would be my most challenging
project to date.”

The original 23,000 square foot facility was built in 1936 and in 1948 two additions were added to the structure
taking its footprint to more than 120,000 square feet. It employed thousands of workers for decades until
Valleydale closed the plant in 2006. “The haphazard nature of the multiple additions made it impossible to walk from one end of the building to the other in a straight line, so we understand why finding a new tenant has been such a challenge,” says Salem City Manager, Jay Taliaferro. “It needs a lot of remediation from its prior use and let’s not forget that it sits in the flood
plain.”

When Walker purchased the property five years ago, he said it would be a “tough puzzle” to figure out but
promised that he would “be swinging for the fences.” “I wish we could have preserved the building, but the historic tax credit oversight agency wouldn’t allow any new windows on any exterior sides,” he says. “This new Valleydale project in its identity, architecture and public space decor will celebrate the history of the company and the generations that worked there. Plus, the silver lining is that this project is four times more valuable to the city than any other concept.”

Walker and Thompson will invest at least $50 million in the site, and they plan to build between 300 and 330 units spread out in three buildings with amenities that will include a pool and terrace area, club rooms, a gym, dog run, car and pet washing areas, large greenspaces, garage, covered and surface parking, extensive landscaping, and many other features.

“We are thankful to be welcomed by the City of Salem in this dynamic public-private partnership,” says
Thompson. “We will deliver a quality modern product, as typically seen in urban environments, combined with
the sense of place and amenities realized in a suburban community. T

Petal it Forward returns to the Valley this week

Three local partners will be handing out 5,000 bouquets of flowers around the Roanoke Valley this week. WFIR’s Emma Thomas with details: 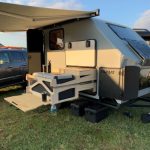 Wombat Camper, a Roanoke startup which manufactures small, overland-style camper trailers, will unveil its first production model this weekend at the Roanoke Go Outside Festival. A prototype was displayed at a previous GoFest. Julie Meilak is the company’s co-owner with husband Brad; they are working with Lift Arc Studios and TxTur to build the $75,000 Wombat. Meilak says they hope to draw interest from some of the 30,000 plus people expected to attend GoFest in downtown Roanoke this weekend for the high-end Wombat, which has a queen-size bed, a “wet” bathroom, a shower and an indoor-outdoor kitchen space.

Its called the Roanoke Collaboration Project, a few years in the making. Described as a group of local civic minded volunteers who believe that civil dialogue collaboration across diverse stakeholders is key:

Find out more here about the Roanoke Collaboration Project 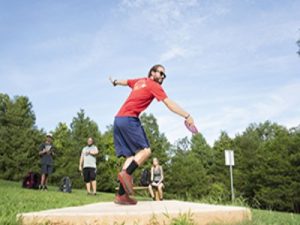 Many cities and counties in the region have built disk golf courses as part of their parks and recreation facilities, but Bedford County in particular is using disk golf as a big tourism draw. There are five public disk golf courses across the county, and one of them is bringing in serious players from across the country.  The New London Tech course is on the Lynchburg side of Bedford County, designed for advanced and professional play, and it is drawing more than 100 pro disk golfers to a tournament there two weekends from now. The other four courses in the county are suitable for varying levels from beginner on up, and tourism officials say a main goal is to make them a starting point for visiting Bedford County. WFIR’s Evan Jones has more:

Bedford County will host the 4th Annual Battle for Bedford Disc Golf Tournament, a PDGA-sanctioned event, October 22 and 23. At last report,  almost 400 are registered, coming from about 20 different states and also Canada.

VWCC and Steel Dynamics partner to invest in workforce development

A local community college has partnered with Steel Dynamics to offer a handful of employees the opportunity to earn a degree at no cost. The group will be pursuing classes towards a two-year mechatronics degree. A Dean of the college says the agreement demonstrates investment in employee development in the area. WFIR’s Emma Thomas with more:

Roanoke’s gas prices bucked the national trend last week, but analysts say that luck may turn with the meeting of an intergovernmental organization. WFIR’s Emma Thomas has that story: 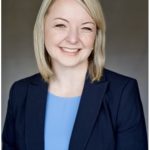 Roanoke County has announced the appointment of Megan Baker as Director of Economic Development. Baker will assume her new position October 24. She comes to Roanoke County from Peachtree City, Georgia where she currently serves as President of the Fayette County Development Authority (FCDA). Baker leads the business attraction and retention programs for Fayette County and spearheaded development of a 600-acre business park. Baker follows Jill Loope, who announced her retirement in July. Loope will be heading up the tourism department in Parks, Recreation and Tourism until next July, when she will officially retire

Prior to her role with the FCDA, Baker was Policy Director at the Georgia Chamber of Commerce where she led economic and demographic research and analysis for Georgia 2030, the Chamber’s strategic initiative. 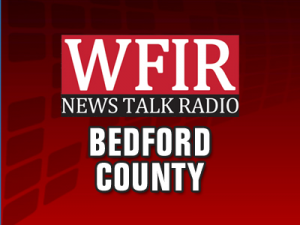 Bedford County got a recent unexpected tourism boost from an unsolicited article in Travel and Leisure magazine. The article mentions many of Bedford’s key year-round attractions like the National D-Day Memorial before saying autumn is the best time of year to visit, citing things like fall foliage along the Blue Ridge and apple picking. Officials say it helps reinforce the county’s tourism message, as WFIR’s Evan Jones reports: 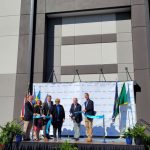