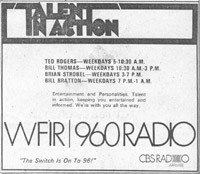 In 1969, just as Rogers was becoming a fixture on 960, something really important happened—Times-World was compelled to divest its radio and TV properties.

The paper sold WDBJ Radio and WDBJ TV to separate owners in May 1969. However, the TV properties were spun off first, by a matter of just a few days. That meant that the new owners of 960 AM, the Vodrey Family of Canton, Ohio, had to find a new name for their radio station. 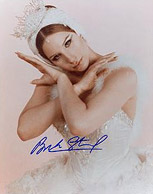 The radio station’s music during the 60’s and 70’s moved away from country, and edged a little closer to the popular “light rock” music you can still hear today. Elvis Presley, the Mamas and the Papas, Anne Murray, Elton John, and even a little disco like Donna Summer were popular on WFIR during these years. Because the station was perceived as the “adult” music station, DJs still played quite a bit of big band music and oldies.

This was a time of dramatic change for WFIR in other ways.

Just a year or so after WFIR changed hands, it moved to perhaps its most appropriate location, Towers Mall, still site of the station’s towers. In April 1970, WFIR took over the space next to the current Katie’s Ice Cream where the mall management office is now located on the lower level.

In 1977, Jim Gibbons, the “Voice of the Washington Redskins,” purchased WFIR and the sound of the radio station began to change forever. That same month, listeners began hearing more news and sports reports. Gibbons was changing WFIR into a full-service radio station with a mix of local news, national commentary by CBS legends like Charles Kuralt, and easy listening music to fill in the spaces.

In August 1979, Larry King made his debut on WFIR as a syndicated overnight talk show host on the erstwhile Mutual Radio Network. He joined iconic financial advisor Bruce Williams as one of WFIR’s first two talk shows, although the conversion to an all News/Talk format did not take place for another ten years.

In 1985, the year “Back to the Future” took over movie theatres, and Phil Collins’ “No Jacket Required” topped the record charts, there were two important staff changes. Longtime station DJ Bill Bratton was promoted to program director; Bratton is principally credited with changing WFIR to its current format. And a New England native named Bob Clark joined Ted Rogers in the morning as WFIR Sports Director.

Clark started as a DJ on a New Hampshire radio station in 1962. Hired just weeks before the Cuban Missile Crisis, he also saw two Kennedys and Martin Luther King assassinated during his first few years on the radio. In his more than 20 years at WFIR, Clark has been a DJ, morning show host, afternoon show host, and sports personality. He and his wife, Mary Lu, have one daughter who works in television news in South Carolina.

WFIR’s location on Hounds Chase Lane. The Kabuki restaurant is to the immediate right.

In the spring of 1988, the staff moved once more, making their home on Hounds Chase Lane next to the Kabuki restaurant. One year later, WFIR took two giant steps towards becoming the station you hear today.

WFIR became one of the earliest affiliates of the Rush Limbaugh show on March 13, 1989. At that time, Rush broadcast from 12:00 – 2:00 PM. Rush would visit Roanoke and broadcast from the Hounds Chase studios just a year or two later. One week after becoming a Rush Limbaugh affiliate, on Monday morning, March 20, listeners turned on 960 AM to hear an all News/Talk radio station.

The lineup that morning was:

Everyone was talking about WFIR’s new format!