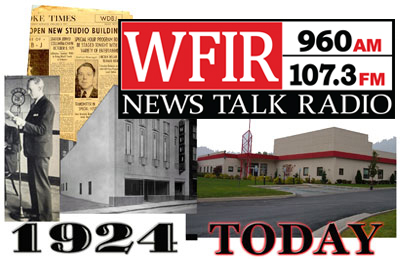 WFIR is the second-oldest radio station in Virginia and one of the oldest commercial radio stations in the country. The station you listen to now for Roanoke Valley news, weather, and talk shows began long ago as the radio hobby of Mr. Frank E. Maddox.

Maddox built and operated amateur station “3BIY” until his employer, the Richardson- Wayland Electrical Corporation, convinced him in 1924 to build a commercial station.

Richardson-Wayland sold radios and parts, and management knew they could sell more radios if people simply had something to listen to. Roanokers could hear nothing at all during the day and could pick up only sporadic signals at night.

The 5’ x 4’ transmitter for Roanoke’s new 20 watt blowtorch (many modern stations broadcast at 50,000 watts!) went in the back of Richardson-Wayland’s shop at 106 West Church Avenue next to the current Texas Tavern. Mr. Richardson converted his office into an impromptu studio.

Thus was born the radio station initially known as WDBJ.

The first musician to go on the air on WDBJ’s assigned frequency at 1310 AM was Raymond Jordan. On June 20, 1924, a banjo player accompanied Jordan on the fiddle for several selections:“Soldier’s Joy,” “Turkey in the Straw,” and “Darling Nellie Gray.” Seven miles away, near present-day Lewis-Gale Clinic, a group of the station’s promoters gathered in the parlor of S. H. McVitty. McVitty owned one of the few factory-built receiving sets in the area and the broadcast reportedly came in loud and clear!

Poor Mr. Richardson eventually got his office back when he arranged to create a real studio for WDBJ in the music department of the Thurman and Boone Company where the Heironimous building is located now. Heavy rugs covered the walls and ceiling.

Not long after that, WDBJ abandoned the Thurman and Boone room in favor of a second floor studio of the Grand Piano Company on Campbell Avenue. And during the winter of 1926-1927, WDBJ moved into its first modern, specially constructed studios in the American Theater Building located at Jefferson Street and Campbell Avenue. 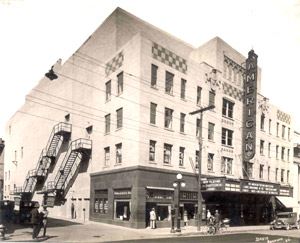