In May 1931, Richardson-Wayland sold the station to the Times-World Publishing Company and five years later, a Roanoke landmark pierced the sky. On May 10, 1936, WDBJ broke ground on a new transmitter building and tower. Engineers built a 312-foot tower in Colonial Heights, which can still be seen jutting from the center of Towers Mall. 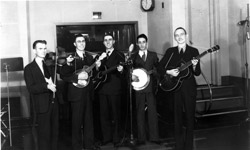 Charles Scott and his Harmonizers. The guitar player on the right is Lester Flatt.

In the 1930’s, western swing music and western themes in clothing and books were all the rage, and the music on WDBJ followed right along. The Texas Troubadours were perhaps Roanoke’s favorite local western act. They joined national groups like the Sons of the Pioneers, the Girls of the Golden West, and Gene Autry. They played right alongside more traditional groups like Charlie Scott and his Harmonizers, who played in WDBJ’s Studio B.

Believe it or not, Roanoke rivaled Nashville during this era for country music influence. In time, WSM’s “Grand Ole Opry” made Tennessee the center of the country music universe and WDBJ’s influence in Dixie began to fade. In just a few years, WDBJ would move something besides its studios.

In 1941, the North American Radio Broadcasting Agreement changed the dial position for about 800 radio stations. At exactly 3:00 in the morning on March 29, 1941, the radio station moved to its current frequency, 960 AM. 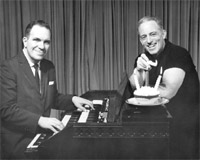 During the 1940’s, one of the radio station’s most enduring performers achieved national acclaim. Irving Sharp became known as “Mr. Dr. Pepper” because of his successful sales endorsements of the drink. He also hosted Sharp’s Daily Duzin’, Salt and Peanuts, and the Silver Dollar Man. “Cousin Irv” eventually went on to TV, hosting Cartoon Theatre and the Top of the Morning Show. And for decades, he continued to host weekend music programs on the radio station that made him a star.