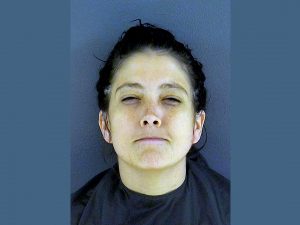 The Bedford Emergency 911 Dispatch Center received a call from a citizen that a female had stabbed a male multiple times in the woods in this area. A description was provided by the caller and as deputies arrived and observed a female matching the description at the intersection of Shingle Block Road and Rock Cliff Road and were able to take her into custody without incident.

The female was identified as Kathryn Hudson of 1094 Musser Court.  Through investigation it was determined that Hudson had assaulted a Donald Craighead who was transported to Roanoke Memorial Hospital with injuries to his face, neck, and back.  Latest report is that Craighead is in critical condition.

Hudson was transported to the Bedford Adult Detention Center and charged with Malicious Wounding.  She was held without bond.

This investigation is still ongoing.