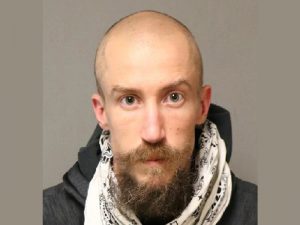 UPDATED NEWS RELEASE: Shortly after 12:30 p.m. Tuesday (Sept. 29), Virginia State Police were alerted to information related to the male suspect in Sunday night’s incident at a Grayson County church. With the assistance of the Town of Marion Police Department and Grayson County Sheriff’s Office, state police took Gregory D. Graham, 31, of Marion, Va., into custody without incident at his residence in the 300 block of Brushy Mountain Road. State police arrested Graham on one count of malicious wounding.

He is being held without bond at the New River Regional Jail. Additional charges may be placed after further consultation with the Grayson County Commonwealth’s Attorney. The incident remains under investigatio
PREVIOUS: The Virginia State Police is investigating an unusual incident at a rural Grayson County church Sunday night (Sept. 27, 2020). At approximately 8:30 p.m., about 20 people were gathered inside a church in the 11000 block of Flatridge Road in the community of Troutdale when a banging was heard on the doors at the main entrance. An off-duty Virginia State Police trooper opened the door and encountered a man and a dog standing just outside. The trooper asked if he could help and the man yelled back at him. It was at this point that the trooper observed the man was holding a hatchet. As the trooper attempted to close the door, the man swung the hatchet and struck the back of the trooper’s hand. The trooper was able to close the door and directed the members of the congregation to immediately go to the church basement for their safety.
The man and his dog then left the property, at which time the trooper assisted everyone safely to their vehicles. The off-duty trooper could hear the man yelling and howling from the woodline. State police resources responded to the scene to search for the male subject who is described as a white male in his 30’s with long, brown hair. He is approximately 5’10 in height and of medium build. He was wearing a backpack and was accompanied by a small, black, collie-mix dog. He may also be in the company of an adult female.
Anyone with information about this individual is asked to please contact the Virginia State Police by dialing #77 or 276-228-3131 or by email to questions@vsp.virginia.gov.
The trooper suffered minor scratches to his hand and was treated at the scene. No one else at the church was injured.