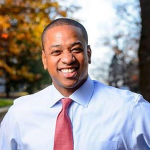 RICHMOND, Va. (AP) — Virginia Republicans are renewing their push to hold a bipartisan hearing into sexual assault allegations two women have made against the state’s Democratic lieutenant governor. Their effort looks doomed, as Democrats quickly opposed it and called it a political stunt.  GOP Del. Rob Bell sent a letter to Democrats on Monday saying an upcoming special legislative session on gun laws could double as an opportunity for a bipartisan hearing on Lt. Gov. Justin Fairfax’s behavior. Two women earlier this year publicly accused Fairfax of sexual assault and said they want to testify before the legislature, but only if both political parties participate. Fairfax has denied any wrongdoing. “We respectfully ask the Democratic Caucus to agree to something — anything — that would allow bipartisan public hearings to take place,” Bell said in his letter. Republicans currently control the General Assembly, but Bell said GOP leaders would agree to create a special committee equally split among Republicans and Democrats for the hearing.

Virginia lawmakers weren’t originally scheduled to return to the Capitol this year. However, in response to a mass shooting last month in Virginia Beach, Gov. Ralph Northam called a special session for July 9 to debate gun laws. Democratic leadership have previously rejected a GOP proposal for a hearing on Fairfax and quickly shot down Bell’s latest request. “We will not participate in House Republicans’ political games, nor will we turn such serious allegations into a partisan sideshow,” House Minority Leader Del. Eileen Filler-Corn said in a letter Tuesday.

In February Vanessa Tyson publicly accused Fairfax of forcing her to perform oral sex in his hotel room during the Democratic National Convention in Boston in 2004. Meredith Watson has also publicly accused Fairfax of sexual assault. She issued a statement accusing him of raping her two decades years ago while they were students at Duke University. The Associated Press generally does not name people who say they are victims of sexual assault, but both women have come forward voluntarily.

Democrats have been divided on how best to respond to those allegations, caught between supporting the only African-American elected official in statewide office and the #MeToo movement that gained steam after allegations of sexual misconduct arose against movie mogul Harvey Weinstein. Several Democratic House members have said they don’t believe the General Assembly is the best place to investigate the allegations and said they don’t want to impede possible criminal investigations. But other Democrats have said lawmakers should prioritize the wishes of the alleged victims and allow a public hearing.

Fairfax has characterized the allegations as part of a racially motivated smear campaign intended to derail his political career, though both his accusers are African American. The allegations became public shortly after a racist photo in Northam’s medical school yearbook resurfaced and nearly drove the governor from office, which would have made Fairfax the governor.
Fairfax has called for law enforcement officials to investigate the allegations and said he’s confident his name will be cleared. His spokeswoman, Lauren Burke, said Tuesday that Bell’s letter is an attempt by Republicans to divert public attention from “the NRA’s control over the GOP” ahead of a special session on guns.“A Republican show trial during an election year is not an investigation that will reveal the truth,” Burke said.