Ex-EPA leader Wheeler to serve as adviser to Youngkin 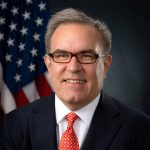 She didn’t immediately respond to questions about the scope of Wheeler’s new position or how long he intends to stay on.

In Virginia, the governor’s cabinet nominees are subject to confirmation by the part-time and currently divided General Assembly, though lawmakers rarely reject nominees. This year, Democrats who narrowly control the state Senate united against Wheeler as he faced criticism from environmental groups and some ex-EPA employees for an EPA tenure criticized as overly deferential to corporate interests. In February, the Senate voted along party lines to reject his appointment.

Youngkin repeatedly said he hoped Democrats would reconsider. But earlier this month, legislators gave final approval to all Cabinet members but Wheeler.

Lawmakers adjourned their regular session Saturday but are expected to return to Richmond soon for a special session to deal with unfinished business, including the state budget.

While legislators were meeting, the partisan fight over Wheeler’s nomination spiraled into a broader back-and-forth over other appointments and confirmations. The GOP-controlled House effectively removed a nominee of former Democratic Gov. Ralph Northam from the power State Corporation Commission by letting her appointment expire and booted 11 other Northam nominees from other boards and commissions.

The Senate then retaliated by removing four Youngkin parole board members.

Lawmakers left town before any resolution was reached on those or other vacancies, including two spots on the Supreme Court of Virginia. It was not immediately clear how soon the governor would call lawmakers back for the special session or how the sparring over the appointments would end.

Voyles, the acting secretary, most recently served as oversight counsel for the U.S. Senate Committee on Environment and Public Works under Republican Sen. Shelley Moore Capito of West Virginia.

“In this role, he served as the lead coordinator of the Committee’s efforts for environmental, energy, economic development, and infrastructure issues, including primary oversight over a wide range of federal agencies programs and funding,” according to a biography provided by the governor’s office.

Voyles, who holds a law degree, also served in multiple appointed roles at the EPA, the biography said.

The last time a governor’s cabinet appointee was rejected, in 2006, then-Gov. Tim Kaine, a Democrat, took the same approach as Youngkin. He appointed Daniel LeBlanc, a former president of the state AFL-CIO, to serve as a senior workforce adviser.