After some schools push back on masks, Virginia orders them 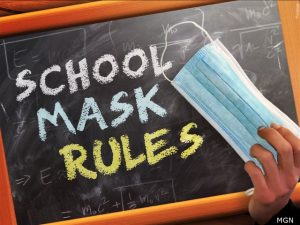 The Northam Administration has issued a statewide indoor mask mandate for all Virginia K -12 schools. The health department order comes after some school systems had chosen not to require face coverings, and it follows what has been shifting guidance on the subject from Richmond in the last month that has frustrated many parents and school officials.

State Senate Republicans including leader Tommy Norment have also issued a stinging rebuke to the Health Department and Governor Northam’s mask mandate order for schools today, saying in a joint statement that, quote, “Northam’s announcement … makes it clear that he was not telling the truth in his attempt to impose a mask mandate last Thursday when he falsely claimed ‘the legislature made me do it.’ Now … he has imposed yet another mandate, usurping local authority without any opportunity for public input.”

The move came after a handful of school districts in recent days decided to buck the governor’s interpretation of a state law and opt not to require face coverings, against the current recommendations of the U.S. Centers for Disease Control and Prevention. Tension over the politically divisive issue has exploded at one school board meeting after other in the past week.

“This is a way to ensure uniformity in schools across Virginia,” Northam spokesperson Alena Yarmosky said.

The mandate came in the form of a public health order from the state health commissioner, Dr. Norman Oliver.

The governor’s administration has offered shifting guidance on the subject in the past month, frustrating some school officials and parents, as conditions worsened due to the surging delta variant of the coronavirus.

Cases of COVID-19 and hospitalizations are both on the rise in Virginia, although the state is not facing the same dire conditions as others in the South. Over the past two weeks, the rolling average number of daily new cases has increased by nearly 988, an increase of about 132%, according to data from Johns Hopkins University.

After a previous public health order that required masking in schools even after the statewide mandate was lifted came to an end in July, Northam opted not to issue a new one. He said school divisions would have the ability to implement local policies “based on community level conditions and public health recommendations.”

At the time, the CDC was not recommending indoor masking, but the agency changed its guidance in late July, recommending it for all teachers, staff, students and visitors at schools nationwide, regardless of vaccination status.

At a news conference a week ago, Northam highlighted a law passed by the General Assembly earlier in the year mandating in-person instruction, saying it also requires school districts to follow mitigation strategies from the CDC “to the maximum extent practicable.”

The governor suggested school districts could face legal action if they did not comply.

His comments prompted some school districts that had not intended to require masks to reverse course. But some districts, mostly in rural areas, decided in recent days not to require masks.

Among them is mostly rural Patrick County, where the school board voted Monday to recommend but not mandate mask-wearing, against the advice of its attorney and insurance agent, the Martinsville Bulletin reported.

Hanover County, outside of Richmond, also opted against a mask mandate, according to local news outlets.

And school board meetings even in districts that ultimately have adopted mask mandate have turned contentious.

In Virginia Beach, dozens of people spoke at a meeting that went into the early morning hours of Wednesday before the school board ultimately voted to require masks, The Virginian-Pilot reported. Some speakers cursed the board, made offensive gestures at them and accused them of child abuse, according to the newspaper.

It was not immediately clear how districts without a mask mandate would respond to the latest directive.