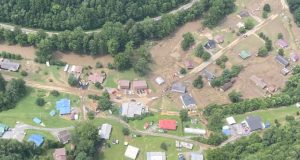 WHITEWOOD, Va. (AP) _ Authorities say flooding in a remote corner of southwest Virginia has damaged more than 100 homes but there are no confirmed deaths or injuries despite some 40 people being unaccounted for. Officials said at a news conference Wednesday that the flooding occurred in Virginia’s Buchanan County. Virginia Gov. Glenn Youngkin declared a state of emergency to aid in the rescue and recovery efforts from Tuesday’s floodwaters. Authorities said the number unaccounted for was expected to decline as swift-water rescue teams continue their work. Buchanan County also suffered serious flooding damage last year, when the remnants of a hurricane hit the area in August, washing away homes and leaving one person dead.