Several firearms and pounds of drugs found on Radford man 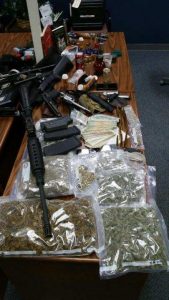 A Radford man was arrested after a traffic stop where police discovered drugs and concealed firearms in his car. William Munsey was pulled over on US 11 in Pulaski County over the weekend because the vehicle he was driving did not have a state inspection sticker. The trooper who pulled him over found five pounds of marijuana, thousands of dollars in cash and six firearms.

Full news release can be found below

From Virginia State Police: PULASKI CO. – A Radford, Va., man is behind bars following a traffic stop in Pulaski County Saturday (June 24). At approximately 3:17 p.m, Virginia State Police Trooper J.M. Nunley was traveling south on Route 11 when he observed a southbound 2011 Nissan Titan without a state inspection sticker displayed on its windshield. Trooper Nunley activated his emergency lights and siren to initiate a traffic stop. The Nissan pulled off onto the shoulder.

During the course of the traffic stop, Trooper Nunley detected a strong odor of marijuana coming from inside the vehicle. A search of the vehicle yielded five pounds of marijuana, six concealed firearms, thousands of dollars in cash, and illegal prescription drugs. The driver of the Nissan, William T. Munsey IV, 32, of Radford, Va., was arrested without incident.

The investigation also resulted in a search warrant executed at Munsey’s residence, which led to the seizure of more marijuana and drug paraphernalia.

The investigation remains ongoing at this time.