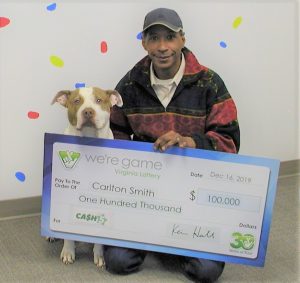 A Roanoke man claimed a $100,000Virginia Lottery prize just days before the ticket would have been worth nothing. Lottery officials say Carlton Smith had been keeping the Cash 5 ticket in a drawer all along, but he wasn’t aware it was a winner until now. It would have expired at midnight Wednesday.

NEWS RELEASE: For months, the question has been: “Where is that ticket?”

A Virginia Lottery Cash 5 ticket matched all five numbers in the June 21 night drawing to win the game’s top prize. But the prize remained unclaimed as the clock was ticking. By law, winning tickets in Virginia expire 180 days after the drawing, which means this ticket was set to expire at the close of business on Wednesday, December 18.

On Monday afternoon, a little more than 48 hours before the prize was set to expire, Carlton Smith of Roanoke walked into the Virginia Lottery Roanoke Customer Service Center with his dog Zeus and presented the winning ticket.

It turns out he had the ticket in a drawer the whole time, not knowing it was a big winner. Then his cousin told him he’d heard publicity about an unclaimed winning ticket and said, “I have a feeling it’s you.”

That’s when Mr. Smith checked the winning numbers and declared, “I have the winning ticket right here, buddy!”

“It really didn’t shock me at first,” he replied when asked how it felt to discover he had the winning ticket.