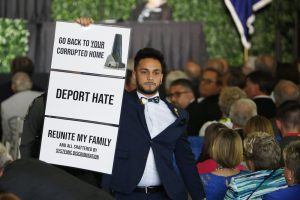 JAMESTOWN, Va. (AP) — President Donald Trump’ speech in Jamestown marking the 400th anniversary of the rise of American democracy at the House of Burgesses was interrupted by a protester who is a member of Virginia’s present-day legislative body. Ibraheem Samirah, a Democratic member of the Virginia House, stood up and held signs that read “deport hate” and “reunite my family.” A third message said “go back to your corrupted home.”

Samirah was led out of the speech site as some members of the crowd chanted “Trump, Trump, Trump.” He said in a statement that he was confident his constituents would rather him protest than “passively accept” Trump’s presence. Republican House Speaker Kirk Cox called the protest “inconsistent with common decency and a violation of the rules of the House.”