Northam says he will not resign 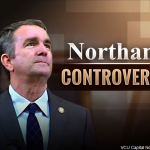 (from Virginia AP) After ignoring calls for his own resignation, Virginia Gov. Ralph Northam is declining to weigh in on whether the state’s embattled lieutenant governor or its attorney general should step down.

Northam said Sunday on CBS’ “Face the Nation” that it’s up to Lt. Gov. Justin Fairfax and Attorney General Mark Herring to make their own decisions. All three Democrats are embroiled in controversies involving race or sex.

Northam said he supports Fairfax’s call for an investigation into allegations of sexual assault by two women. Fairfax has vehemently denied the allegations. Herring admitted to wearing blackface in college. Northam said of Herring, that, “just like me, he has grown.”

The governor has ignored calls to resign since a racist photo from his 1984 medical school yearbook surfaced. He denies being in the photo. But he admitted to wearing blackface in 1984.