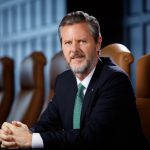 Liberty University’s official Twitter account is retweeting a story from Hill.TV that college President Jerry Falwell Junior alleges a criminal conspiracy against him by former Liberty board members. Falwell is quoted as saying he is sharing information with the FBI about stolen emails at the hands of a small group of people seeking to damage his reputation. This comes one day after a lengthy story in Politico alleged a culture of fear at Liberty.