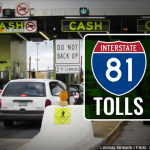 Opponents of plans to implement tolls on Interstate 81 in Virginia say doing so would be unconstitutional, and they indicate they are ready to sue if such a proposal is passed this year in Richmond. WFIR’s Evan Jones has more:

The Alliance for Toll-Free Interstates is leading the opposition, and Virginia Spokesperson Stephanie Kane appeared live Friday on WFIR. Here is the full conversation:

The Alliance has created a web site, www.keeptollsoff81.com.

WFIR will present other points of view in coming weeks as the General Assembly considers the proposals.

Richmond, VA – The Alliance for Toll-Free Interstates (ATFI) blasted Virginia Governor Ralph Northam’s plan to toll Interstate 81 in Virginia as details emerged that the plan is likely unlawful under the U.S. Constitution. In a letter sent to the Governor from the American Trucking Associations (ATA), a member of ATFI, ATA argues how allowing for an auto-only commuter pass along I-81 may create an impermissible burden on interstate commerce.

In a move that could signal their intention to sue, ATA lays out three ways in which the tolling plan is designed to favor in-state motorists at the expense of out-of-state interests:

“We encourage you and the Assembly to think carefully about these issues before Virginia takes any further steps in the direction it appears to be heading, and to bear in mind that the auto-only annual pass option will be vulnerable to a legal challenge if it moves forward,” wrote Jennifer Hall, ATA General Counsel and Executive Vice President of Legal Affairs, in the letter to Governor Northam..

“Virginia has looked at tolling I-81 before and concluded that tolls on existing interstates are bad for motorists, bad for the economy and wildly unpopular,” said Stephanie Kane, spokesperson for ATFI. “Now Virginia policymakers are doubling down on a bad policy idea that is expensive, inefficient, and inequitable – and may doom the Commonwealth to a costly lawsuit that adds years onto the timeline to improve I-81.”

Two lawsuits related to the constitutionality of highway tolls have been filed in the last six months. In July 2018, ATA filed a suit with co-plaintiffs Cumberland Farms, M&M Transport Services and New England Motor Freight against the director of the Rhode Island Department of Transportation based on the claim that the Rhode Island tolls violate the Commerce Clause of the U.S. Constitution, by imposing “discriminatory and disproportionate burdens on out-of-state operators and on truckers who are operating in interstate commerce.” Last week, the national Owner-Operator Independent Drivers Association on Wednesday filed a lawsuit against Indiana Governor Eric Holcomb, the Indiana Finance Authority, the Indiana Toll Road Concession Company, and the commissioner of the Indiana Department of Transportation challenging the increased tolls on heavy vehicles on the Indiana Toll Road that was implemented on October 5, 2018.

“Governor Northam and the General Assembly should abandon the call for risky new state tolling pilots and instead focus on real solutions that improve our surface infrastructure and citizens will support,” added Kane, who noted more than 2,400 letters opposing tolling I-81 had been sent by Virginia residents to Governor Northam and state legislators in the first 6 days since the group launched the “Keep Tolls Off 81” campaign at www.keeptollsoff81.com.