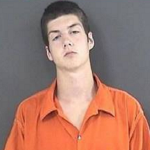 Guilty pleas were entered this morning in Roanoke County court for last year’s triple murder on Bent Mountain. 19-year-old Trevor Charles entered the pleas to three counts of first degree murder and three firearms charges, and he was then sentenced to three life terms plus 13 years. Charles admits fatally shooting restaurant co-workers Brandon Dekle, Cole Kennedy and Miranda Trump. He told police earlier the three were his friends, and he blamed “malicious voices” in his head.

The suspect in this case, Trevor E. Charles, 18, Roanoke, has been arrested and charged with three (3) counts of first degree murder and three (3) counts of use of firearm in the commission of a felony. Charles was remanded into the custody of the Roanoke County/ Salem Jail.
Roanoke County Police would like to thank the public for all of the leads provided and for all the offers of assistance.

PREVIOUS: State and local law enforcement agencies are helping Roanoke County police investigate the three shooting deaths discovered overnight in the Bent Mountain area. K-9 units have been assisting as police try to uncover the circumstances leading up to the fatal gunshots. Police again say the deaths do not appear to be random and there is no apparent danger to the public. Officials say the process of notifying the next of kin is not yet complete, so no names are being released yet.

PREVIOUS: New information on the three people found shot to death this morning at a Bent Mountain home — two men and one woman. Roanoke County Police say the investigation started Monday when a father could not contact his daughter, then found her car crashed down an embankment along Honeysuckle Road, but with no sign of the daughter. Police say that led them to a home not far away overnight, and that is where they found the three bodies. Police say they have tentatively identified the woman but are not yet releasing her name. At last word, work continues to identify the two men.

From Roanoke County Police: On Monday afternoon, 6/11/2018, the father of the female victim was concerned because he had not been able to contact his daughter and began searching for her. He located her vehicle on Honeysuckle Road in the Bent Mountain area of Roanoke County.  The vehicle had been crashed and was down an embankment with no one around it.  The father contacted the Police Department at that time to report the female as missing.

Hours later, the investigation led police to the house in the 9200 block of Bent Mountain Road. When no one responded when police officers knocked at the door, officers entered the residence on a well-being check.  When they did, the officers found the bodies of two males and the female.  All three had been shot.

Personnel from Virginia State Police and FBI are assisting in the investigation. Personnel from the Bent Mountain Volunteer Fire Department have been very helpful in providing resources to Police.

County police are asking for anyone who has information that may be helpful to contact Roanoke County Police at 540-562-3265.

EARLIER: A Roanoke County Police spokesperson says a triple-homicide is being investigated at a home in the 9200 block of Bent Mountain Road. Authorities say two men and a woman were found dead with gunshot wounds at the home near Mount Union Church of the Brethren on U.S. 221. Police say there is no known threat to the public at this time.