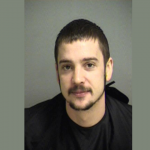 News release: On August 30, 2018, a Bedford County Sheriff’s deputy stopped a Chevrolet S10 pickup truck on Thomas Jefferson Road for multiple traffic violations. The driver of the truck gave the deputy a false identification. While the deputy was attempting to identify the driver, he fled on foot in the area of Thomas Jefferson Rd and Everett Rd. The driver was later identified as Dustin Wayne Gilliam and the investigation revealed he has ties to Amherst County, Campbell County, and Raleigh NC. Dustin Gilliam, age 27, is wanted in Amherst County for probation violation for malicious wounding. He is also wanted in Bedford County for multiple charges.