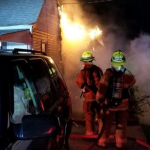 Roanoke City fire officials say an electrical problem started last night’s house fire on the 4300 block of Pennsylvania Avenue. Damage is estimated at $130,000. More than two dozen firefighters were summoned to battle the flames, and officials say they needed about 90 minutes to get the fire under control. There are no injuries reported.

From Roanoke Fire-EMS: The cause of the fire in the 4300 block of Pennsylvania Ave. has been ruled as electrical and did approximately $130,000 in damages. No one was injured. Our crews received the call from the E-911 Center last night around 9:50pm and the fire was under control by 11:22pm. 28 personnel responded to the scene.