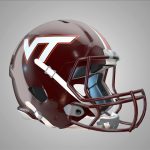 BLACKSBURG, Va. (AP) — Virginia Tech  hardly looked like a team that spent their bye week making improvements. Quentin Harris threw for two touchdowns and ran for another and Duke beat The Hokies 45-10 on Friday night. It was Tech’s worst home loss in decades.

Harris hit Noah Gray with scoring passes of 16 and 1 yards for the Blue Devils (3-1, 1-0 Atlantic Coast Conference). They also scored on a 25-yard trick play on which Harris lateraled to Jalon Calhoun, who hit a wide-open Deon Jackson to make it 21-3 late in the second quarter.

The Hokies (2-2, 0-2) got their only touchdown on a 72-yard connection from Ryan Willis to Damon Hazleton after they fell behind 31-3. The loss is their worst at home since a 49-12 defeat against Houston on Sept. 28, 1974, and was coach Justin Fuente’s first in four games against the Blue Devils.

Harris added a 42-yard touchdown run and Jackson had a 32-yarder early in the fourth quarter, sending fans pouring out of Lane Stadium.

The Blue Devils had done little until a turnover got them going. Hendon Hooker, in his second play at quarterback for the Hokies, tried to hand the ball to Keshawn King but it never got there and the fumble that resulted turned into a 24-yard loss to the Hokies 16. On the next play, Harris hit a wide-open Gray for the touchdown. Jackson was even more open when Calhoun hit him for the third score of the quarter.

After managing just 5 yards in the first quarter, Duke had 162 in the second quarter and 141 in the third. In the fourth quarter, facing a fourth-and 3 from midfield, Blue Devils punter Austin Parker took the snap, tucked it and went for 28 yards off the right side, drawing boos.

Harris later completed a 12-yard pass to Gray on fourth-and-7 from the Hokies 19 on the same drive, and backup quarterback Chris Katrenick ran it in from 8 yards out two plays later for the final points.

Hazleton’s return for the Hokies was expected to boost their passing game, and did on the long touchdown pass, but his first impact wasn’t what coach Justin Fuente was expecting: the wide receiver was called for an illegal blindside block in the second quarter.

The Blue Devils open a two-game homestand with a night game against Pittsburgh.

The Hokies go on the road to face long-time rival Miami.