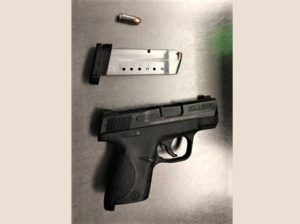 NEWS RELEASE: RICHMOND, Va. – A Virginia man’s honeymoon got off on the wrong foot when he was arrested by police after a Transportation Security Administration (TSA) officer detected a loaded handgun in the man’s carry-on bag at Richmond International Airport on Saturday, Nov. 14.

The TSA officer spotted the 9 mm handgun loaded with eight bullets, including one in the chamber as the Dinwiddie County, Virginia, man’s belongings entered the security checkpoint X-ray machine.

TSA alerted airport police, who responded to the checkpoint, confiscated the handgun and arrested the man, who was ticketed to fly to Hawaii for his honeymoon with his wife. He claimed that he forgot that he had his loaded gun with him.

“When you’re packing for a flight, my advice is to make sure that your baggage is empty when you start to pack to ensure that there is nothing prohibited in it,” said Chuck Burke, TSA’s Federal Security Director for Richmond International Airport.

TSA reserves the right to issue a civil penalty to travelers who have guns with them at a checkpoint. A typical first offense for carrying a loaded handgun into a checkpoint is $4,100 and can go as high as $13,669 depending on any mitigating circumstances. This applies to travelers with or without concealed gun carry permits because even though an individual may have a concealed carry permit, it does not allow for a firearm to be carried onto an airplane. The complete list of civil penalties isposted online. If a traveler with a gun is a member of TSA PreCheck®, that individual will lose their TSA PreCheck privileges.

Guns caught at Richmond International Airport checkpoints from 2016 to 2020

Nationwide last year, 4,432 firearms were discovered in carry-on bags at checkpoints across the country, averaging about 12.1 firearms per day, approximately a 5% increase nationally in firearm discoveries from the total of 4,239 detected in 2018. Eighty-seven percent of firearms detected at checkpoints last year were loaded.

TSA has details on how to properly travel with a firearm posted on itswebsite. Travelers should also contact their airline as they may have additional requirements for traveling with firearms and ammunition.