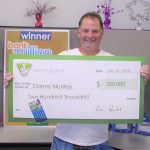 A Vinton man is $200,000 richer after winning one of the ten top prizes in a Virginia Lottery scratcher game. Danny Nunley purchased the winning Jewel 7’s game on Friday the 13th, which turned out to be anything by an unlucky day for him.

News release: “Friday the 13th is going to be sort of lucky for us from now on.” That’s how Sherry Nunley reacted to her husband Danny Nunley winning $200,000 in the Virginia Lottery’s Jewel 7sScratcher game. On July 13, a Friday, he stopped at Happy Shopper, 931 Gus Nicks Boulevard NE in Roanoke, to get some drinks. When he scratched the ticket, he couldn’t believe what he was seeing. So he asked his wife to confirm that it was indeed a top prize winner. “I don’t think so,” she replied. “We’re not that lucky.” But they were that lucky. He’s the seventh person to claim the top prize in game #1676, which means three $200,000 tickets remain unclaimed.