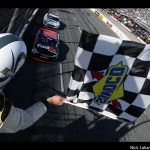 FROM VDOT: The Virginia Department of Transportation encourages race fans driving to and from Martinsville Speedway for the race on Sunday, October 29, to follow recommended traffic patterns as posted on signs and message boards.

VDOT will place many signs and changeable message boards throughout the region to assist travelers. Vehicular and pedestrian traffic will be heavy. Traffic is being routed to the speedway in certain patterns to minimize overall congestion as much as possible. Watch for the speed limit to reduce gradually from 65 mph to 35 mph on the Route 220/Route 58 Bypass as you approach the speedway.

Those attending the race should closely follow directional information and plan to arrive early and expect heavy traffic and delays.