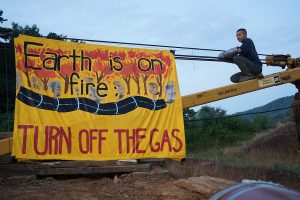 From the Franklin County Sheriff’s Office:  On August 15, 2019, shortly after 7:00 AM, security personnel with Mountain Valley Pipeline contacted the Communications Center for the Franklin County Sheriff’s Office in reference to two protestors that were chained to a piece of equipment near Wades Gap Road in Callaway. The caller reported an additional 4-5 people standing in the roadway that were protesting. Deputies responded to the scene to verify that everyone was okay. The Virginia State Police responded to the scene as well. The protestors on the roadway were asked to leave and obtain a demonstration permit. These protestors left the scene without incident.

The protestors chained to the equipment appeared fatigued so deputies called in the Franklin County Department of Public Safety to assess the subjects for any medical issues. VSP responded to the scene with a specialized team trained to remove protestors from the equipment safely. The protestors were removed from the equipment without incident. Both protestors have been arrested and charged with trespassing and tampering with a vehicle. 27-year-old Melissa M. Dubois of Worcester, MA was released on a $1,500.00 bond, and 19-year-old Amory L. Zhou-Kourvo of Ann Arbor, MI  is currently being held without bond.