Trump to Liberty U grads: Relish being an ‘outsider’ 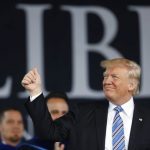 LYNCHBURG, Va. (AP) — Donald Trump, the real estate mogul-turned-president, offered simple words of advice to university graduates Saturday as he urged them to follow their convictions, prepare to face criticism and relish the opportunity to be an “outsider.”

“It’s the outsiders who change the world,” Trump declared in his first commencement address to more than 18,000 graduates of Liberty University, a Christian school whose president was one of Trump’s earliest and most outspoken supporters during last year’s presidential campaign.

Trump kept to a largely upbeat message during the roughly 30-minute speech, never mentioning his stunning decision this past week to remove James Comey as FBI director. Trump said Comey is a “showboat” and “grandstander” who was fired because he wasn’t doing a good job.

But the timing of Trump’s decision raised questions as he remains frustrated by FBI and congressional investigations into Russia’s role in the 2016 presidential campaign that ended with Trump’s election, along with possible ties between Trump associates and the Russian government.

Trump said Saturday that he could name a new director by Friday, when he departs on his first foreign trip as president to Saudi Arabia, Israel, Italy and Belgium. Justice Department officials began interviewing candidates in Washington on Saturday.

Drawing parallels to what was widely viewed as a longshot presidential bid by Trump, who had never held elective office before winning the November election, Trump urged the graduates to never stop fighting for what they believe in.

“Remember this: Nothing worth doing ever, ever, ever came easy,” he said. Tens of thousands of people packed an on-campus stadium to welcome Trump, the second sitting president to address the university’s commencement ceremony, with applause and a standing ovation.

“Following your convictions means you must be willing to face criticism from those who lack the same courage to do what is right, and they know what is right, but they don’t have the courage or the guts or the stamina to take it and to do it,” said Trump, who did not wear a gown.

Trump advised the graduates to “never quit” and to carry themselves with “dignity and pride.”

“Demand the best from yourself and be totally unafraid to challenge entrenched interests and failed power structures,” Trump said, in a dig at the Washington political establishment he has vowed to shake up. “Does that sound familiar, by the way?”

Trump also urged graduates to “treat the word ‘impossible’ as nothing more than motivation” and “relish the opportunity to be an outsider.”

Trump suggested they choose careers they love “or you most likely won’t be very successful at it.”

Trump won an overwhelming 80 percent of the white evangelical vote during the election, and a recent Pew Research Center survey marking his first 100 days in office — a milestone reached on April 29 — found three-fourths of white evangelicals approved of his performance as president. Just 39 percent of the general public held the same view.

Christian conservatives have been overjoyed by Trump’s appointment of Justice Neil Gorsuch to the Supreme Court, along with Trump’s choice of socially conservative Cabinet members and other officials.

But they had a mixed response to an executive order on religious liberty Trump signed last week directing the IRS to ease up on enforcing a rarely enforced limit on partisan political activity by churches. Trump also promised “regulatory relief” for those who object on religious grounds to the birth control coverage requirement in the Affordable Care Act health law.

Yet the order did not address one of the most pressing demands from religious conservatives: broad exemptions from recognizing same-sex marriage.

“I really don’t think any other president has done more for evangelicals and the faith community in four months than President Trump has,” Falwell told The Associated Press in a telephone interview on Friday.

Trump spoke at Liberty University in January 2016, drawing some laughs when he referred to one of the Bible’s books as “Two Corinthians” instead of the more common “Second Corinthians.” In that speech, Trump promised to “protect Christianity.”

He made the same pledge again Saturday.

“As long as I am your president no one is ever going to stop you from practicing your faith or from preaching what’s in your heart,” said Trump, an occasional church-goer. “We will always stand up for the right of all Americans to pray to God and to follow his teachings.”

Trump is scheduled to address graduates of the U.S. Coast Guard Academy in New London, Connecticut, on Wednesday.