Three people and a cat displaced by Vinton fire 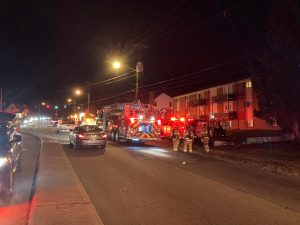 (Roanoke County, VA—February 8, 2022) Roanoke County Fire and Rescue responded at 7:40 p.m. on Tuesday, February 8, 2022 to 125 West Virginia Avenue, in the Town of Vinton, for the report of a commercial structure fire in an apartment building. First arriving crews from Station 2 (Vinton) found smoke and fire showing from the second floor of a three-story apartment building and marked it a working fire. The apartment was occupied by three adults and a cat at the time of the fire. The fire was brought under control in about 10 minutes. The adult occupants and cat are all safe and there were no injuries. One person in another apartment was transported to a local hospital for a medical issue unrelated to the fire. The occupants of the apartment where the fire occurred will be displaced and are being assisted by the American Red Cross. We appreciate the assistance of Roanoke Fire and EMS on this call. The Roanoke County Fire Marshal’s Office is on scene to investigate a cause and provide a damage estimate.