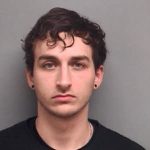 The Henry County Sheriff’s Office is currently investigating a shooting that occurred during the early morning hours of February 18, 2022.  At approximately 1:05 am, the Martinsville-Henry County Emergency 911 Center received a call of a subject that was shot in the abdomen at 964 Southland Drive, Martinsville, Virginia.

Deputies from the Henry County Sheriff’s Office responded to the scene and made contact with Ray E. Durflinger Jr, 42, of 964 Southland Drive.  Mr. Durflinger had suffered a gunshot wound to his abdomen.  He was transported to SOVAH Health Martinsville and subsequently air-lifted to a North Carolina hospital for treatment of life-threatening injuries.

Through the course of the investigation, it was discovered that Jake Raleigh Robertson was at Mr. Durflinger’s residence, where an argument ensued outside near the roadway.  During the argument, Robertson produced a firearm and shot Mr. Durflinger one time.  Robertson fled the scene and was subsequently taken into custody during a traffic stop.  Jake Raleigh Robertson, 23, of Axton, Virginia, was arrested and charged with Aggravated Malicious Wounding and Use of Firearm in Commission of Felony.  He is currently held in the Henry County Jail with no bond.