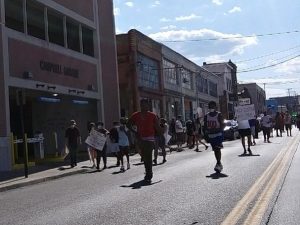 Protesters marched through Roanoke streets on two separate occasions Saturday in response to the death of George Floyd in Minneapolis. Police ordered an end to the nighttime’s  protest after someone threw a flare or firework at officers. The night protests began outside Walmart and Target at Valley View Mall and continued later with stops that included the Sheetz near the Berglund Center and several downtown streets, going by the police headquarters several times. Police report some damage at the Walmart, and city officials say why peaceful protest will be tolerated, unlawful activities will not. 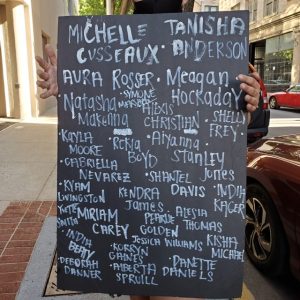 Earlier in the day, hundreds of protesters  marched along Roanoke streets. The marchers walked toward downtown from the Gainsborough neighborhood, but once they headed down Campbell Avenue, they were kept away from walking down the middle of the street directly in front of Roanoke Police headquarters.  After some tense moments, the marchers  moved along the sidewalk across the street. Police said the protesters were not allowed to walk down the street since they did not have the necessary permit to do so. 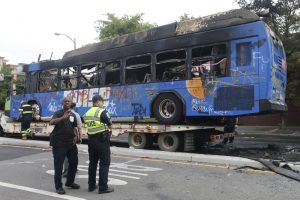 RICHMOND, Va. (AP) — Protesters in Virginia responding to the death of George Floyd earlier this week in Minneapolis smashed windows at police headquarters and briefly shut down a major highway.

In Richmond, a Friday evening protest that began at Monroe Park, near Virginia Commonwealth University, drew hundreds of people who marched through the streets chanting “no justice, no peace.”

As the protest ran on, newsoutlets report a police cruiser and a dumpster near Richmond Police headquarters were set on fire. A Richmond television reporter covering the protests was struck by a thrown bottle. Later, a city bus was set ablaze. Police responded by spraying chemicals. Virginia Capitol Police said Saturday that Capitol Square will remain closed Saturday.

In Hampton Roads, hundreds of protesters, white and black, marched from Fort Monroe to Interstate 64 to close the Hampton Roads Bridge-Tunnel. They entered the highway shortly before 9 p.m. and stopped traffic in both directions, causing delays before moving on, newsoutlets reported.

The protests in Virginia were similar to those carried out across the nation in response Floyd’s death. His arrest Monday was caught on camera and he could be heard saying “I can’t breathe” while a white officer, Derek Chauvin, pressed his knee on Floyd’s neck for nearly nine minutes. Chauvin was charged Friday with third-degree murder and second-degree manslaughter.