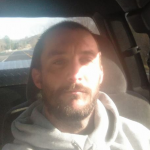 Roanoke County Police have charged a man with attempting to hold up the Little Caesar’s earlier this month at Cave Spring Corners — but they haven’t found him. Police are looking for Cory Orange of Roanoke.

News release: The Roanoke County Police Department has charged Cory S. Orange, of Roanoke, with Attempt to Commit Robbery (Code Section 18.2-26 /18.2-58) stemming from an attempted robbery at Little Caesars at Cave Spring Corners. His whereabouts are still unknown at this time and Roanoke County Police seek the public’s assistance in locating the suspect. He is described as a white male, 5’9,” approximately 160 lbs. with brown hair and hazel eyes. Anyone with information is asked to contact the Roanoke County Emergency Communications Center at 540-562-3266. Attached is a photo of Orange as seen on his Facebook page. Also attached are the original news release and surveillance video photos.