PGA Tour tournaments at the Greenbrier are over 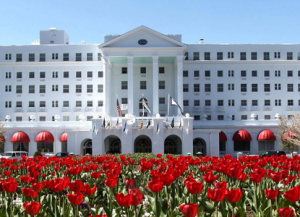 The PGA Tour tournament at the Greenbrier Resort has come to an end after a 10-year run. Greenbrier officials say attendance and interest were not the same once the tournament was moved from July to September.  The PGA Tour and resort agreed to cancel not only this year’s tournament, but all future ones as well. They had been scheduled through 2026.

NEWS RELEASE: WHITE SULPHUR SPRINGS, W.Va. – (April 16, 2020): The Greenbrier resort announced today that due to the COVID-19 worldwide pandemic, it and the PGA TOUR have made a decision to not conduct The 2020 A Military Tribute at The Greenbrier, scheduled for September 7-13, 2020. This decision was made collaboratively between the two organizations. It is quite possible that, due to the virus, those dates will be used for another PGA TOUR event. Those details will be announced by the PGA TOUR.

Additionally, The Greenbrier and the PGA TOUR have elected to cancel A Military Tribute at The Greenbrier for the remaining years of the contract, which was previously planned to run through 2026. The tournament moving to the fall has not served The Greenbrier as well as the event did in prior years when it was hosted over the July 4th week. With kids being back in school, the attractiveness for sponsors and the attendance for the fans dropped significantly.

“We are happy to reach a resolution with the PGA TOUR that is mutually beneficial to both parties in this time of crisis,” said Dr. Jill Justice, President of The Greenbrier.

“We owe a supreme debt of gratitude to Governor Jim Justice and his Greenbrier resort for a highly successful 10 years of partnership with the PGA TOUR,” said Andy Pazder, Executive Vice President and Chief of Operations for the PGA TOUR. “Governor Justice’s vision and leadership helped shine a light on the men and women that serve our country through the military and first responder programs he implemented through the tournament, and The Greenbrier resort was an incredibly unique and world-class venue that our players will always remember and cherish.”

The Greenbrier’s rich golf history dates back more than a century and has included some of the biggest names and events in the sport. Those who have played the world-class courses at America’s Resort include Sam Snead, Ben Hogan, Gary Player, Arnold Palmer, Jack Nicklaus, Lee Trevino, Nick Faldo, Tom Watson, Phil Mickelson, Bubba Watson, Tiger Woods and many more. The Greenbrier has hosted both the Ryder Cup (1979) and Solheim Cup (1994), as well as a PGA TOUR Champions event, The Greenbrier American Express Championship.

The nearly 2,000 Ladies and Gentlemen of The Greenbrier want to thank the great people of West Virginia, the PGA TOUR, the U.S. Military relief organizations, The First Responders Children’s Foundation, the amazing sponsors, the wonderful professional players, the dedicated volunteers, and all that helped make the last 10 years of this event a world-class success.