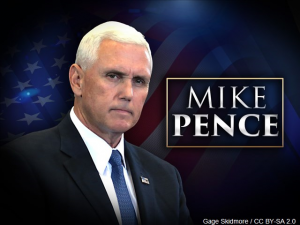 VIRGINIA BEACH, Va. (AP) — Vice President Mike Pence made a campaign swing through Virginia on Saturday to try to shore up support for Republicans as they try to maintain control of the state legislature in Tuesday’s election.

Pence was surrounded by Republicans in a middle school gym in Virginia Beach, where a crowd of about 900 people chanted “USA!” and “Trump!”, The Washington Post reported .

The GOP holds a slim majority in Virginia’s General Assembly.

Pence called Virginia’s election and governor’s races in Kentucky and Mississippi a referendum on the Trump administration. He said the administration has made the country stronger, safer and more prosperous.

“It’s great to get the vice president in Virginia Beach in the final days of the campaign to help inspire Trump voters to come out,” said conservative radio host John Fredericks, a member of Trump’s 2020 advisory board.

Democrats predicted Pence’s appearance will “be a huge help” to them in winning majorities in the House of Delegates and Senate. Voter unhappiness with Trump helped Democrats flip 15 House seats in 2017.

During the event, Pence promoted the USMCA treaty that has been negotiated as a replacement for the North American Free Trade Agreement.

Mexico’s Senate has ratified the agreement, but U.S. lawmakers have yet to do so.

“At a time when we see endless investigations and a partisan impeachment, this is a time for Democrats in Congress that represent Virginia to put politics aside,” Pence said. “Put jobs, and workers, and agriculture, and Virginia first, and represent the USMCA.”

The rally was held in the district of U.S. Rep. Abigail Spanberger, who helped flip Republican seats to the Democratic column in 2018.

“I stand ready to keep working with the administration to expand export opportunities for our district’s small businesses, manufacturers and farmers,” Spanberger said in a statement, according to the Richmond Times-Dispatch .