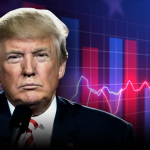 President Donald Trump on Sunday declared “NO MORE” to a deal to help “Dreamer” immigrants and threatened to pull out of a free trade agreement with Mexico unless it does more to stop people from crossing into the U.S. He claimed they’re coming to take advantage of protections granted certain immigrants. “NO MORE DACA DEAL!” Trump tweeted one hour after he began the day by wishing his followers a “HAPPY EASTER!”

He said Mexico must “stop the big drug and people flows, or I will stop their cash cow, NAFTA. NEED WALL!” The U.S., Canada and Mexico are participating in tense negotiations over the North American Free Trade Agreement at Trump’s insistence. Trump says NAFTA is bad for the U.S.

Trump, when addressing reporters briefly before entering the church, again blamed Democrats for failing to protect the “Dreamers.” “They had a great chance. The Democrats blew it. They had a great, great chance, but we’ll have to take a look because Mexico has got to help us at the border. They flow right through Mexico. They send them into the United States. It can’t happen that way anymore.”

The president also complained on Twitter that border patrol agents can’t do their jobs properly because of “ridiculous liberal (Democrat) laws” that allow people caught for being in the country illegally to be released while they await a hearing before a federal immigration judge.