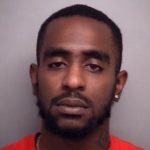 NEWS RELEASE: On September 10, 2019 at approximately 5:33pm a threatening message was discovered inside Hanes Brands Inc. located at 380 Beaver Creek Dr., Martinsville, VA. The message indicated that an explosive device had been placed inside the facility. The Henry County Sheriff’s Office Explosives Detection Canine and his handler along with other deputies conducted a systematic search of the building. Nothing suspicious was located.

The Henry County Department of Public Safety and local volunteer fire and rescue units were on scene as a precaution. The Henry County Sheriff’s Office and Hanes Brands officials worked together to ensure the safety of the employees. Through the course of the investigation a male employee was developed as a suspect.