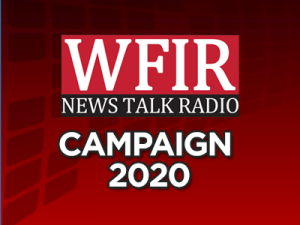 A new statewide poll shows Joe Biden holding a 12-pointlead over President Donald Trump in Virginia, and Senator Mark Warner’s lead is even greater over Daniel Gade. The Wason Center Poll from Christopher Newport University was released this morning, and it finds likely voters favoring Biden 53-41%, with only 4% undecided. On the Senate side, Warner’s lead is 57-37%.  The poll finds that COVID-19 is the issue of greatest concern among those questioned, as WFIR’s Evan Jones reports:
WASON CENTER POLL NEWS RELEASE FROM CHRISTOPHER NEWPORT UNIVERSITY:  With Election Day just under a week away, Democrat Joe Biden holds a commanding lead over President Donald Trump in Virginia. Among likely voters, Biden leads Trump by 12 points, 53%-41%. Very few voters remain undecided (4%),with many voters having already cast their ballots in-person or by mail. “Biden’s lead continues to illustrate Virginia’s solid shift left in presidential and statewide races,” said Wason Center Research Director Rebecca Bromley-Trujillo. “The test on Election Day will be whether that shift holds in the competitive congressional districts that went to Democrats in 2018.”
President: Biden’s lead among Virginia voters is partially built from a large gender gap. Women support Biden over Trump 60%-38%,while men, usually Republican-leaning, are closely split at 46%-45%. In 2016 Trump’s support among men in Virginia was 52%to Hillary Clinton’s 43%. Biden’s lead also stems from very strong support in the traditional Democratic coalition of Black voters (90%-9%) and college-educated voters (60%-35%), while among voting groups that tend to support Republicans, Trump shows only a small advantage among non-college educated voters (48% to 46%)and trails Biden among voters 45 and older (54%-42%). Both hold their partisan base, with 90% of Republicans supporting Trump and 93% of Democrats supporting Biden.
U.S. Senate: Democrat Mark Warner leads Republican Daniel Gade by 20 points among likely voters (57%-37%), showing strength across all groups except Republican partisans. This represents a 7-point increase from the Wason Center poll in mid-September. Warner continues to do very well with the Democratic coalition of college-educated voters (62%-33%), younger voters (55%-35%), Black voters (85%-3%) and women (63%-34%), but also leads among men (51%-39%), voters 45 and older (58%-38%) and non-college-educated voters (51%-41%), and matches Gade among white voters (48%-48%). Since the September survey, Warner has gained significantly in those Republican-leaning groups. Gade’s support is derived from his Republican base (86%).
Constitutional Amendment: Virginia voters continue to show strong support (54%-24%)for a state constitutional amendment creating a commission to draw boundaries for Virginia’s 11 U.S. Congressional districts, 40 state Senate districts and 100 House of Delegates districts. The 30-point lead comes from a strong preference in favor of the amendment across every voting group, though 22% are undecided. Democratic voters strongly support the measure (66%) while Republicans are closer on the issue (48% support, 31% oppose, 21% are undecided). This represents a disconnect between party leadership and their voters, as the Virginia Democratic Party opposes the measure, while the state Republican Party supports it.
Key Issues: Virginia voters indicate that the COVID-19 pandemic is the most important issue for the next president to address (29%), followed by the economy (21%) and health care (13%). Rounding out the top 5 issues for voters are racial inequality (11%) and climate change (6%). “Voters have COVID-19 on their minds as they vote, which is not good news for President Trump,” said Wason Center Academic Director Quentin Kidd.
Click here for full poll results and methodology.