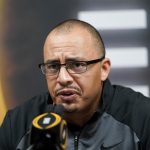 Virginia didn’t have to extend its search for a new football coach beyond the Atlantic Coast Conference as the Cavaliers announced Friday they had tabbed longtime Clemson offensive coordinator Tony Elliott to fill their vacancy. Cavaliers athletic director Carla Williams announced Virginia was hiring Elliott, who will be introduced at a news conference next week. No details of his contract were released though Elliott earned about $2 million a year at Clemson.

“Coach Elliott is a winner, in every sense of the word. He is known for his character, humility, work ethic, skill set and passion for education,” Williams said in a release. “Coach Elliott is an exceptional leader of young men and he is highly regarded across college football as a talented teacher and coach. He is an outstanding recruiter who has been responsible for recruiting, signing and developing scholar-athletes while competing for and winning championships.”

Elliott will replace Bronco Mendenhall, who stunned the school on Dec. 2 by announcing he is stepping down after Virginia’s bowl game. In six seasons, Mendenhall has led the Cavaliers to four bowl games — they opted out after last season — and their first ACC championship berth in 2019. Virginia lost 62-17 in that matchup against Elliott and eventual national champion Clemson.