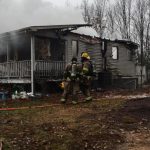 News release: Roanoke County Fire and Rescue responded at 2:05 p.m., on Saturday, December 15, 2018 to the 7500 block of Cove Hollow Road, in the Fort Lewis area of Roanoke County for the report of a residential structure fire. As crews approached the scene they could see heavy black smoke in the area. First arriving crews found a single story home fully involved in fire. The home was occupied by two adults, and two pets, at the time of the fire. Both adults made it out of the home safely and were not injured. The death of one dog can be confirmed in the fire and it is believed that one cat has also died in the fire. The two adults will be displaced and the American Red Cross will be assisting them. Crews from Fort Lewis, Masons Cove, Cave Spring, and Montgomery County responded to the fire. This is a very rural area of Roanoke County where fire hydrants are not present. Fire crews on scene used several tanker trucks to shuttle water to the scene of the fire. The Roanoke County Fire Marshal’s Office is on scene to investigate a cause. This will be a total loss fire as the roof of the home has been destroyed.