Garrett: I am an alcoholic, will not seek reelection 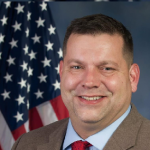 Congressman Tom Garrett said in video statement released Memorial Day that he will not seek re-election to a second term. The 5th District Republican said he is struggling with alcoholism and must devote his time to focus on his recovery. This comes three days after Garrett said while he was frustrated with the federal bureaucracy and had considered not seeking a second term, he had every intention of running. Garrett’s latest decision not to run was first reported Monday by the Washington Post.