Freitas: Pipelines are fine but eminent domain abuse is not 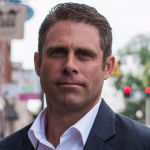 One of the three Republican candidates for U.S. Senate says he is getting his campaign into high gear now that the General Assembly session is mainly over. Delegate Nick Freitas officially opens his campaign headquarters tonight in Charlottesville, and in advance of that, he spoke with WFIR’s Evan Jones, a conversation that turned to the federal government’s role in approving the Mountain Valley and Atlantic Coast Pipelines: