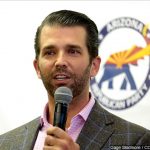 President Trump’s oldest child told a Liberty University audience that conservatives must fight back when attacked from left — and his father is one of the few in recent decades to do it. Donald Trump, Jr. was there yesterday to promote his new book in which he writes that conservatives have allowed the left to use all sorts of tactics to smear them — without making any effort to fight back. He delivered a similar message at Liberty, as WFIR’s Evan Jones reports: