Roanoke police say a robber shot and wounded a convenience store clerk during a holdup this morning.  Police say the clerk, 38-year-old Manzoor Ali Kahn of Montvale, told them that a man with a gun entered the Quick Mart in the 3000 block of Salem Turnpike about 7:00 a.m.  The clerk said the robber fired one shot into the air and then fired a second shot, which struck him in the arm.  Kahn said after he was wounded, the suspect forced him to walk to the register and give him money.  Kahn was taken to Carilion Roanoke Memorial Hospital.The suspect got away with an undetermined amount of money.  Police describe him  as a short man, wearing blue jeans with designs on the front pockets, a dark hooded sweatshirt, and red shoes with white laces.  He had a mask on his face. 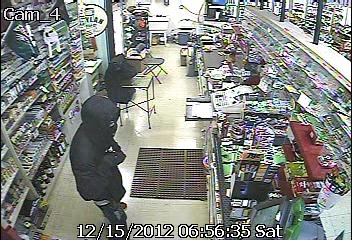