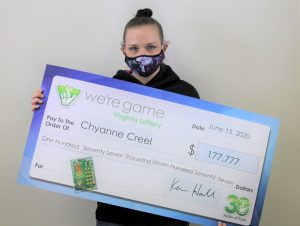 NEWS RELEASE: What’s a good way to end an argument? Win the lottery!

That’s what Chyanne Creel did. The Roanoke woman and her boyfriend Joshua were having a tiff, so they went for a drive to cool off. When they stopped for gas in Vinton, she asked him to go inside and buy her a drink and some scratcher tickets.

One of the tickets was for the Virginia Lottery’s Lucky 7s Tripler game. She scratched it and then said, “Come look at this!”

“We turned right around!” Joshua told Virginia Lottery officials when the couple redeemed the winning ticket.

The winning ticket was bought at Nishi Food Mart, located at 1551 East Washington Avenue in Vinton.

Lucky 7s Tripler (game #1996) is one of dozens of Scratcher games available from the Virginia Lottery. It features prizes ranging from $5 to $177,777. There is currently one more $177,777 prize unclaimed in this game.