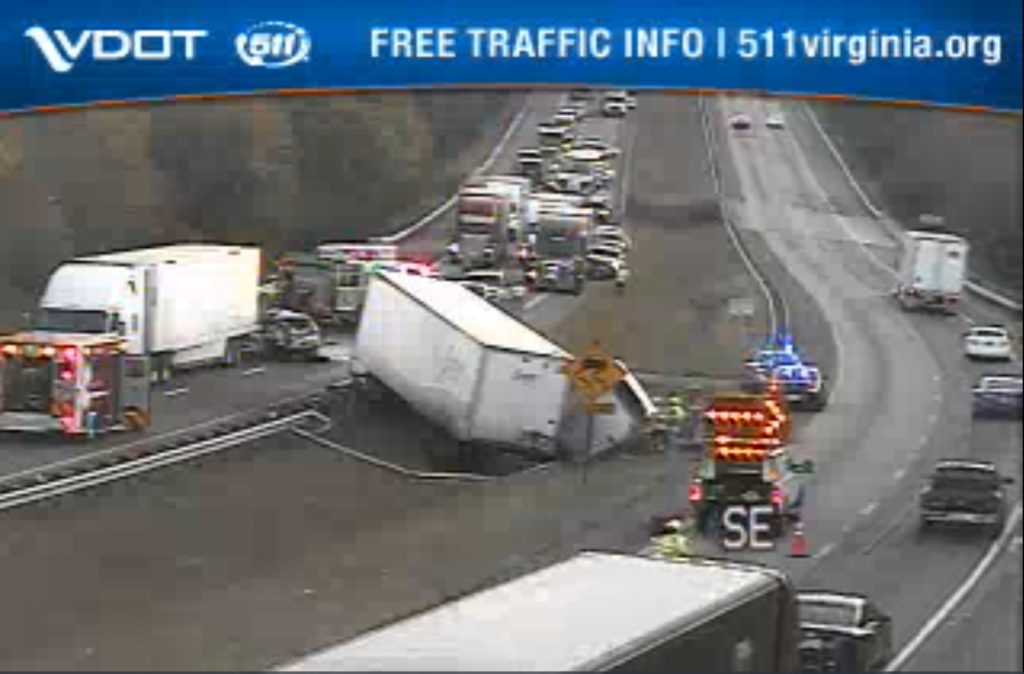 UPDATE: State Police say two area drivers were killed yesterday on Interstate 81 when a tractor trailer ran into two cars and another big rig that were stopping for traffic. The two men driving cars were both killed; police identify them as Jeffrey Noffsinger of Roanoke and Peter Ozolins of Blacksburg. Troopers say the truck driver, Joshua Bernard of Elizabethton, Tennesee is charged with reckless driving, and the investigation is continuing.

The accident occurred around 6:00 last night in the northbound lanes of 81 in the Glenvar area, and police and crews needed several hours to investigate, clear the wreckage and re-open the highway.

UPDATE FROM STATE POLICE: ROANOKE Co, Va. – Virginia State Police Senior Trooper R.K. Hawse is investigating a four vehicle crash which resulted in a double fatality.  The crash occurred Wednesday (Oct 2) at 6:00 p.m. on the northbound side of Interstate 81 at the 134 mile marker in Roanoke County.

Interstate 81 northbound near the 134 mile marker, traffic was slowing and coming to a stop. A 2014 International tractor trailer, traveling in the right lane struck two cars and another tractor trailer which were stopping for traffic.  The International came to rest in the median.

The 2014 International was driven by Joshua A. Bernard, 38, of Elizabethon, TN.  Mr. Bernard was wearing his seatbelt and was not injured.  Bernard was charged with Reckless Driving.

The 2011 Hyundai Santa Fe was driven by Jeffrey A. Noffsinger, 51, of Roanoke, VA.  Mr. Noffsinger was wearing his seatbelt and was transported to Roanoke Memorial Hospital, where he later died.

The 2009 Lexus RX-350 was driven by Peter C. Ozolins, 64, of Blacksburg, VA.  Mr. Ozolins was wearing his seatbelt and was transported to Roanoke Memorial Hospital where he later died.

The 2016 Freightliner was driven by Yang Li, 33, of Rancho Cucamanga, CA.  Mr. Li was wearing his seatbelt and was not injured.

PREVIOUS: WDBJ-7 is reporting two people were killed during a tractor trailer accident yesterday on I-81 in Roanoke County. State police say two tractor trailers and two cars were involved in the crash at mile marker 134, which is between the Dixie Caverns and Wildwood Road exits. The identities of the victims have not been released.

PREVIOUS: An accident brought northbound Interstate 81 to a standstill in the Glenvar area Wednesday evening. VDOT traffic cams show several vehicles in the road near milemarker 134, which is between the Dixie Caverns and Wildwood Road exits — and no traffic getting through. In addition, one southbound lane is closed.

From VDOT: On I-81 at mile marker 134 in the County of Roanoke, motorists can expect delays due to a tractor trailer accident. All North lanes are closed. The South left shoulder and left lane are closed.