UPDATE: Accidents cleared on I-81 but leftover backups remain 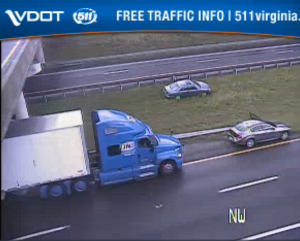 UPDATE: All accidents have been cleared, all lanes are open, but there are some leftover delays.

PREVIOUS: We’ve had northbound traffic problems all afternoon on I-81, and we have a new one in the Hollins area — a tractor trailer accident at milemarker 146. The left lane is closed there, and one car that appears to be involved can be seen in the median. Northbound delays are quickly growing and now extend at least six miles back to Thompson Memorial Drive.

PREVIOUS: VDOT reports a northbound accident at milemarker 121 has been cleared. Its traffic cams show northbound traffic starting to move again in the area, but some residual backups remain for several miles.  Cleanup operations continue, meanwhile, six miles back at milemarker 115 between Radford and Christiansburg; VDOT reports one northbound  lane is blocked there, creating additional backups of  two miles. There is is the likelihood as well for heavy traffic on US 11/460 from I-81 to the Shawsville and Dixie Caverns areas.