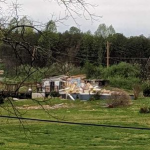 * At 227 PM EDT, Doppler radar indicated thunderstorms producing heavy rain across the warned area. Up to two inches of rain have already fallen. Flash flooding is expected to begin shortly.

* Some locations that will experience flooding include… Pulaski… Galax… Hillsville… Dublin… and Fries. Additional rainfall amounts of one to two inches are possible in the warned area.

Turn around, don`t drown when encountering flooded roads. Most flood deaths occur in vehicles. When it is safe to do so, please send your reports of flooding, including mudslides or flooded roads, to the National Weather Service by calling toll free at 1…8 6 6…2 1 5…4 3 2 4. Reports and pictures can also be shared on the National Weather Service Blacksburg Facebook page and on Twitter.

PREVIOUS: VDOT reports US 220 has re-opened south of Rocky Mount, where an apparent tornado touched down this morning, bringing trees across the roadway and extensively damaging at least one home.  State police, the sheriff’s office, and local fire and rescue personnel are all assembled in the area. So far, we have no reports of deaths or serious injuries.

The Franklin County Animal Shelter says today’s tornado damaged its facility, but everyone is safe. The shelter is closed for the rest of the day.

A tornado watch means conditions are favorable to development of tornadoes.