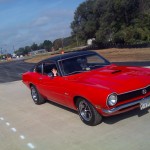 Vinton officials cut the ribbon on the new Walnut Avenue bridge this morning as they wrapped up a year-long project … Mayor Brad Grose had the honor of driving the first car across the new bridge – his vintage 1971 Ford Maverick … Grose says the new bridge is safer. Sidewalks and bike lanes from the Walnut Avenue bridge will be extended to downtown Vinton and the new Glade Creek Greenway will extend from the other side of the bridge towards Roanoke. WFIR’s Gene Marrano spoke to Mayor Grose: