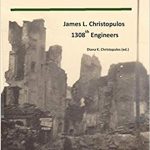 Diana Christopulos is a local environmentalist who has commented here on a number of issues. Now she’s released a book about her father’s exploits during World War Two in both the European and Pacific theaters – “Combat Engineer – A World War II Memoir.” Among other things she says James Christopulos and his crew became experts at quickly replacing bridges blown up by German troops.  Combat Engineer – A World War II Memoir is available at Book No Further in downtown Roanoke and online at Amazon.