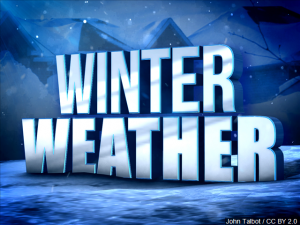 The National Weather Service has issued a Winter Storm Watch for much of the region, mainly for areas along and south of US 460.  Forecasters say heavy snows are possible in affected areas starting as early as Saturday night and lasting into Monday. Heaviest accumulations are currently expected across parts of Southside Virginia and northwest North Carolina.

From the National Weather Service: Low pressure will track from the southwest U.S., to the Gulf Coast states through Saturday while cold high pressure builds across the Ohio Valley and Mid-Atlantic. This low will then move off the southeast coast Sunday into Monday. With the colder air in place, a prolonged period of snow is expected, starting as early as Saturday night, and lasting into Monday. Based on the forecast track, the heaviest snow is expected to occur across southern Virginia, into northwest North Carolina.