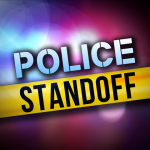 UPDATE: A standoff is now over in southwest Roanoke County, and a suspect is in custody. It began with a call of shots fired this morning on the 5600 block of Brahma Road between Cave Spring and Oak Grove. It ended this afternoon when 50-year-old James Brickey walked out of the home without incident. No one was hurt.

PREVIOUS: Roanoke County Police are handling an apparent standoff in the southwest county, and they have urged people living nearby to evacuate or shelter in place. It began with a call of shots fired this morning on the 5600 block of Brahma Road. That is in the Farmington Lake neighborhood between Cave Spring and Oak Grove. Police say family members at the home were able to get out safely, but the shooter is still inside, and officers have not been able to communicate with that person. SWAT units and negotiators are all present as part of the police response.

News release: Roanoke County Police are currently on scene in the 5600 block of Brahma Road in southwest county. Police responded there at approximately 8:30am in response to a call of shots fired in a residence. Other family members were able to evacuate before police arrived. Police have advised neighbors to evacuate or shelter in place. SWAT and negotiators are also at scene.