UPDATE: Cause of death ruled for two women found in submerged car 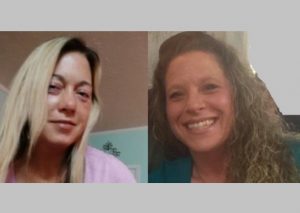 UPDATE:  The State Medical Examiner’s Office has ruled that two women found in a submerged car in Smith Mountain Like died from drowning, and the deaths have been ruled accidental. The bodies of Bridgett Clark and Becky Williams were discovered last weekend, about one week after they disappeared.

PREVIOUS: The bodies of two women found inside a submerged car over the weekend in Smith Mountain Lake have been positively identified as the two women who disappeared from the Buena Vista area a week earlier. At last report, there is no word yet on the cause of death for 42-year-old Bridgett Clark and 40-year-old Becky Williams.

PREVIOUS NEWS RELEASE: At approximately 8:30pm Saturday, a vehicle was recovered from Smith Mountain Lake in the area of the 5000 block of Webster Road in Glade Hill, Virginia. The vehicle recovered matches the vehicle description from a missing persons case out of Rockbridge County and Buena Vista. Two bodies have been found inside of the vehicle and will be sent to the medical examiner for further evaluation. This investigation is ongoing at this time.

Investigators believe the two took Interstate 81 to Interstate 581 and then used Route 116 to get to Franklin County.

The last known contact with either Williams or Clark was on Sunday at 2:30 a.m.