Warner: concerns about what was known about UVA shooter before Sunday 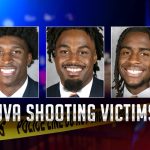 The suspect in the murders of three UVA student-athletes on Sunday had several incidents involving guns on his record – when he shot three members of the Cavaliers football team dead and wounded two others. Virginia US Senator Mark Warner on whether more red flags – and stop signs – need to be put in place. WFIR’s Gene Marrano has the story: